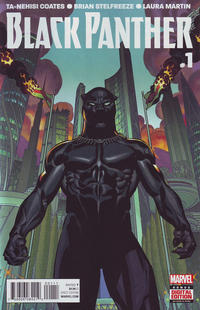 There have been many Black Panther series over the
years from Marvel, but the title has never been one to appear near the
top of the sales charts. In April, the new series from Ta-Nahisi Coates and Brian Stelfreeze not only was the comic book most ordered by comics shops in North America, but with sales of more than 253,000 copies, Black Panther #1 is easily the best-selling issue of the year thus far. Click to see the sales estimates for comics ordered in April 2016.

As we mentioned here on Friday, the overall sales reported by Diamond Comic Distributors
reflect a considerable drop, not all of which can be attributed to the
fact that last April was the highest volume month of the year — and had
one more week to boot. One of the elements playing a role, as noted
there, is the fact that the pace of new comic book releases has slowed
in 2016.

We can see this looking at the first four months of each year, which include an equivalent number of shipping weeks (17):

That’s
a drop of a little more than 3%, which doesn’t sound that significant.
Yet the fact is that the cutbacks have disproportionately come from the
publishers whose titles sell better. Here’s what it looks like if you
just look at the Top Seven Publishers (Marvel, DC, Image, IDW, Dark
Horse, Boom, and Dynamite):

That’s
a much larger drop, of more than 12%. The number of new releases from
Diamond from non-Top 7 publishers is up 29% — but since those publishers
titles sell far less on average, they don’t come close to making up the
difference.

Digging down, we actually see that the slowdown in new comics releases is greater with some publishers than others

CHANGE in number of NEW COMICS RELEASED
in January-April 2016 by publisher:

While Marvel actually published about an additional comic book a week, Dynamite cut its new comics offerings nearly in half, and Boom
reduced its release pace by more than a third. Every other publisher in
the top seven also cut back, but by smaller numbers. Remember, this is
an exactly equivalent time period: seventeen weeks.

We
see in looking at graphic novels, however, that several of those
publishers have in fact redirected attention towards graphic novels this
year.

CHANGE in number of NEW GRAPHIC NOVELS RELEASED
in January-April 2016 by publisher:

That’s
right: the number of new graphic novel releases is up 15% overall
year-to-date, and Boom has increased its number of releases by 69%. [Update: I was aware that the Boom shift had been announced sometime late last year — and have finally located the link. Clearly that plan has gone forward.] DC,
Marvel, and the collected publishers under seventh place are up double
digits. And that would seem to track with the story of the year, so far:
comic book dollars are down nearly 8%, while graphic novel dollars are
up close to 5%.

The problem is simply that since
retailers spend two of every three dollars on comic books, a slowdown in
that category erases a percentage increase of twice the size on the
graphic novel side. And since it was the larger publishers that were
releasing more comics last year, the absence of those issues has an
outsized effect.


So supply appears to be a factor; regression analysis might find out how
much (a project for another day). It should be noted that smaller
release slates aren’t necessarily a bad thing, if the result is that the
publishers and retailers are earning more profit per title; figuring
out how much the comics market will absorb is the name of the game. It
does appear that in 2016, at least thus far, the six publishers after
Marvel in the charts have been a little more (and in some cases, a lot
more) conservative in their periodical releases.

This
month’s 300th place title sold 4,309 copies, which is the highest figure
seen so far this year in that slot; that seems to suggest that the
volumes on that smaller number of titles are hanging in there, at least
this month. Click to see the sales of 300th-place titles across time.

The aggregate changes are as follows:

OVERALL DIAMOND SALES (including all comics, trades, and magazines)