May 2020 Comics Sales through Diamond

This data refers to sales by Diamond. Click to see those from DC's distributors, and for the Overall market.

In response to supply chain and retail disruptions caused by the COVID-19 outbreak, Diamond Comic Distributors announced on March 23 that that no new comics and graphic novels with an on-sale date of April 1 or later would be shipped until further notice. Free Comic Book Day had already been canceled, earlier in March; Diamond's reorder charts also stopped appearing after the March 23-29 edition.

Those would resume at the beginning of May, with Diamond starting to release new comics starting beginning on May 20. In between, something momentous happened: DC announced on April 17 that a limited slate of titles would be available for late April from UCS Comics Distributors and Lunar Distribution, distribution firms that had been set up for the purpose by sister companies to the mail-order retailers Midtown Comics and DCBS (Discount Comic Book Service) respectively. Previous orders through Diamond for those comics were canceled by DC, and retailers were asked to submit new orders.

In addition to the changing volume of new offerings, many comics were made returnable or deeply discounted by their publishers during the month — all of which would have greatly complicated the chart-generation procedures Diamond has employed for decades. Traditional charting under such conditions would have been both more dificult logistically, and less likely to yield clear-cut results. As such, the distributor has yet to release monthly sales charts for May.

In their absence, Comichron has drawn upon a subset of known retail orders both to determine approximate rankings and to project the relative order volumes of comic-book releases. The subset represents a sizable number of copies, but it is not possible at present to know what portion of the overall population of store orders it represents, particularly as many stores were closed, had their accounts on hold, or had not established accounts with DC's distributors. Only periodicals were examined, and order totals are believed to be as of Final Order Cutoff. No statistical adjustments have been made for returnability and no later returns have been subtracted out.

The chart below features every new comic book released by Diamond into the Direct Market in May 2020. Variant editions have been merged into single entries, following longtime industry practice. The release dates are from Diamond; note that many titles had already been released earlier by DC's distributors. (See the DC distributors' May 2020 orders in isolation here.)

Note that even though the chart below is for Diamond specifically, reliable breakdowns of which DC copies came from Diamond and which from UCS and Lunar cannot be made for the May-June period where sales overlapped. The DC figures reported (all marked with asterisks) are based on the publisher's industrywide sales; the DC sales just for Diamond would be lower.

DC offered one comic book with a two cardstock variants at a different price, the chart-leading DCeased Unkillables #3; its sales have been fused by default below. You can find the component versions at the bottom of the chart. The dollar rankings are based on the totals of the fused entries. The order index for another comic book, Flash #754, appears lower because the issue's card stock variant didn't ship until June 2.

Market shares: The market share charts, seen in the column at left, are of a variety that has long appeared on Comichron: they refer only to the top-selling comics (just the 91 new issues released in May, in this case), with no graphic novels included. Further, they resemble the charts that appeared before 2003 in that the charts look only at initial and same-month orders for new releases; reorders and reprints of previous months' comics are not included.

Again with the caveat that we're looking industrywide, and not just at Diamond, we project DC's unit share of the Top 91 new comics to be 45%, once orders across distributors are combined; its dollar share is 46%. That nearly doubles Marvel's 24% and 25% respectively. Marvel only had five new comics releases out in the month versus DC's 34, so its performance might have been expected to be a lot worse — but three of those releases projected to be in the Top 5 overall, so it got a lot of mileage out of them. (That would not be the case in June, when DC would lead the market shares running away.)

Graphic novels are, as noted, not included in these tabulations; DC had twice the number of new GN releases in the Direct Market out in May, so its market share lead was even larger overall than it was for new comics.

To underscore, graphic novels are not included in these projected shares. Actual market shares would differ considerably.

Other things to remember: The retail order subset represents a sizable number of copies, but it is not possible at present to know what portion of the overall population of store orders it represents, particularly as many stores were closed, had their accounts on hold, or had not established accounts with DC's distributors. For example, Justice League had been seeing Diamond orders of more than 40,000 copies per issue in North America the first quarter of 2020, but we do not advise using that number to extrapolate overall sales for other titles — not until we have a better idea how the market size has changed.

We're sticking with whole numbers until we have a better handle on the margin of error. As such, note that a difference of a single point on the chart may not be meaningful, due to rounding. Projections for issues at the lower extremes are thus subject to more error due to the small quantities involved; while we rank such titles, we usually mark them with "no estimate" for that reason. Projected relative sales levels here are likely most reliable for regular series issues in the middle of the chart: orders for the highest sellers and first issues may tend to show more variation.

Rankings in these charts should also be expected to differ — often significantly — from the sales-to-consumers charts available at other outlets. Those report sell-through and not sell-in, and different retailers are sampled in each, with no known overlap in reporting stores as of the generation of the below charts.

As is the case with all data on Comichron, it is subject to revision without notice in the event more authoritative and complete information about orders becomes available.

This list includes all items on Diamond's Top 500 chart. If you don't see a book, Diamond released no data for it.
The Order Index by each comic book indicates how many copies were ordered within a known subset of retailer orders for every 100 Justice League #45s that were ordered.
The stats for DC items are based on industrywide totals; Diamond's totals would be lower.
Differently priced variants appear fused together by default near where they'd have ranked if together.
The component variants are sorted to the bottom of the chart by default.
Distributor charts are regional commodity reports, not measures of a work's total reach. Read our FAQ.
The links lead to current listings for each item on eBay. You can also find the books at your comics shop.

The Batman: Last Knight on Earth hardcover, released May 20 at Diamond, is a good bet to have been the top ordered new graphic novel in May.

Some more information about Diamond's graphic novel sales during the month can be found in its reorders, recorded here.

(All figures below are estimated)
Shipping weeks (New Comics Days) in month: 4 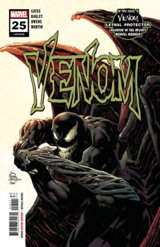 Number of new comic book variants (defined as first and later printings with a cover different from the "main" one):
127