Publishers were still posting some stratospheric numbers in August 1993, and while the Direct Market had actually peaked back in April, that fact was not yet clear to most market participants, who saw sales levels well above those for August 1992. Indicative of trends was the fact that every one of the top five comics was an enhanced foil, die-cut, or hologram cover edition.

Batman #500 released on Aug. 17, becoming the final comic book to have sold over a million copies mostly in the Direct Market until Star Wars #1 from Marvel in January 2015, more than 21 years later. (Pokemon: The Electric Tale of Pikachu #1 sold more than a million copies in 1999, but almost all of them were outside the Direct Market.) Batman #500's sales were split between Collector's and Newsstand editions.

Warriors of Plasm #1, below in sixth place, was solicited as Plasm #1 by Defiant, but changed due to Marvel's Plasmer series. In a similar case, ninth-place Gen-X #1 did not come out from Image; it was the original title of Gen13, and changed because Marvel already had Generation X in development. (The solicitation ad for GenX #1 appears below.) The orders were canceled and the issue was resolicited. 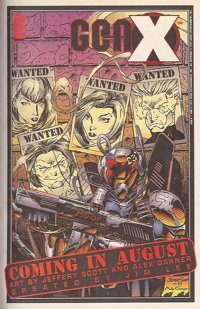 Image's Deathmate Epilogue did not come out in the calendar month from Image either; the series, a crossover with Valiant, would come to symbolize Image's lateness problems in its early days.

Currently, only the order index numbers Diamond released for each issue are available on this page; they are keyed to Amazing Spider-Man's sales. The order index figure published below is the number of copies retailers altogether preordered from Diamond for every 100 copies they ordered of Amazing Spider-Man #382. Our back-of-the-envelope estimate suggests every point on the chart may equal 1,000 copies, but remember that Diamond was only one of several distributors. More detailed estimates are forthcoming.

Click to skip to the Top Graphic Novels for the month.

This list includes all items on Diamond's Top 300 chart.
Distributor charts are regional commodity reports, not measures of a work's total reach. Read our FAQ.
The links lead to current listings for each issue on eBay. You can also find the books at your comics shop.

This list includes all items on Diamond's charts. If you don't see a book, Diamond released no data for it.

The links lead to details about each title on Amazon. You can also find the books at your comics shop.

Diamond did not publish order index numbers for graphic novels in this era, so units cannot be determined. 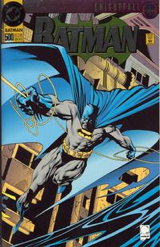 (All figures below are estimated)

One point on the chart released by Diamond likely equals around 1,000
copies. Other distributors would have added more to the total.