A few years back, one of the stranger additions I made between the first and second editions of The Standard Catalog of Comic Books involved celebrity comics. We’d indexed hundreds of covers with photographs of real people — ranging from a very young Elizabeth Taylor (on the covers of Miss America Vol. 4, #3 in 1946 Sweet Sixteen #4 in 1947, among others) to all kinds of appearances of Cassandra Peterson, also known as Elvira, Mistress of the Dark. So we added a database field for “photo cover subject”; it may still be in the current DVD edition, findable via the link above, though I have not checked. 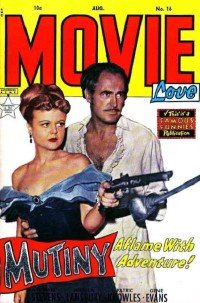 Part of the fun was actually figuring out which movies the promotional stills were from — it wasn’t always noted in the comics, and had to be figured out from a combination of the release date and cross-referencing the filmographies of the actors appearing. And then the database could be used to pull up every appearance — so when we saw Angela Lansbury on the cover of Walt Disney Showcase #6 with the cast of Bedknobs and Broomsticks, we knew we could also find her with Mark Stevens on the cover of Movie Love #16 two decades earlier, promoting Mutiny!

That level of detail was probably more fun for us film buffs to figure out than it was useful for collectors of celebrity memorabilia. But it certainly brought home exactly how much of it there was. The sales on the Obama Spider-Man issue may have been phenomenal, but the novelty factor was only in who was depicted. Based on that earlier work, I would venture that at least 1% — and perhaps 2% of all American comic books have depicted a real individual, either photographically on the cover, or in the story itself. The age of comics like Roy Rogers and The Adventures of Bob Hope may have passed, but if you look at all the faces that have appeared in comics over the years, you’ll see a fair number of ones familiar from real life.

Anyway, to put that new feature of the database through its paces, we did a feature briefly at Comics Buyer’s Guide that drew on the celebrity comics connection — where we’d look to see just what the “comics presence” of various real people was. It was often associated with a memorial angle — and it reminded us of just how many ways there were for a real person’s visage to make it into a comic book. Non-fiction biocomics. Authorized appearances of real-life people as characters, as in the Hope and Rogers cases. Unauthorized appearances in fictionalized contexts, as in the Obama case, or in parodies. And while you probably wouldn’t, say, consider an issue of Star Trek to be a celebrity appearance because the visuals of Kirk are based on William Shatner — not unless Shatner appeared on a photo cover — a celebrity memorabilia collector might not see a distinction. I’ve certainly seen actors being handed issues of comic books to sign featuring characters they portrayed.

The passings this week of Ed McMahon, Farrah Fawcett, and Michael Jackson brought to mind some of the different ways that familiar faces made their way into comics. They all appeared in Mad, for example — and variously in Cracked and Crazy. Then you’ve got a lot of McMahon appearances in regular comics continuity, because The Tonight Show frequently is used as a plot element. The earliest is probably the most famous…

…from 1967’s Amazing Spider-Man #50 by Stan Lee and John Romita, the famous “Spider-Man No More!” issue. McMahon thus functions as other public figures do — he’s part of the Spider-Man narrative just as Obama is. 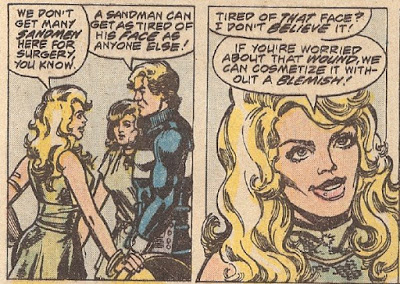 Fawcett appears in a lot of comics in the 1970s — but almost exclusively in the ads. Ads for T-shirts and, yes, that poster. There weren’t any Charlies Angels comic books in those days, so no photo covers — that would only be able to happen someplace like Marvel’s Pizzazz, its version of the 1970s tween mag Dynamite! Outside of the parody magazines in the 1970s, I’ve only been able to locate a character she portrayed — Holly-13 from Logan’s Run #3, drawn here by George Pérez and based on her movie character. (But, hey, it’s Pérez Farrah from 1976.) 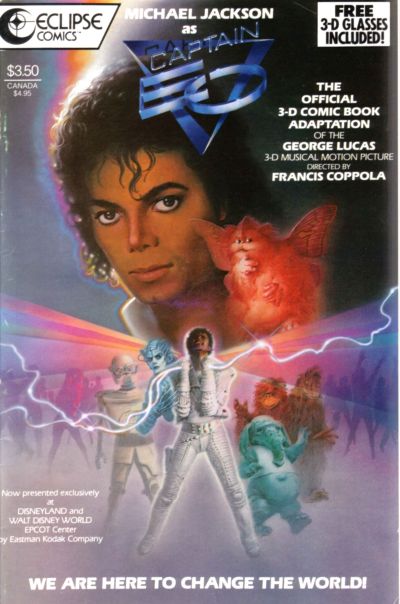 Jackson appears in biocomics form in Rock & Roll Comics #36 in 1991 — I would be surprised if that’s the only one like that. No one ever took a comics license for the Jackson 5 animated cartoon, but Jackson appears frequently in parody — and also as an extra in various places where pop-culture characters came in handy. He’s in one of the pin-ups in Superman #400, for example. Eclipse produced Captain EO in 3-D in 1987, based on a Jackson character; part of a production for EPCOT Center, Eo was no Thriller, but Capital City sold nearly 5,000 copies of them. 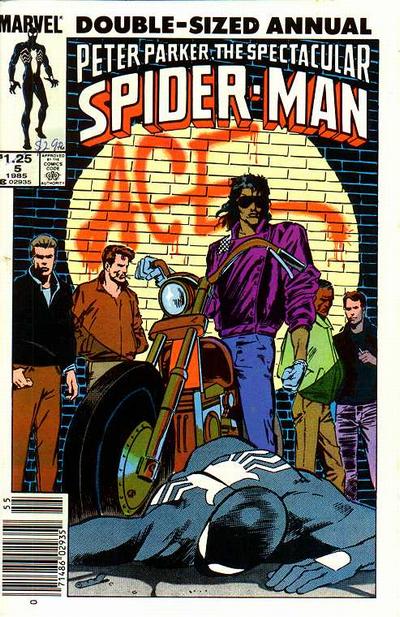 We also get a sense of his pop culture impact during a particular time through a character he partially inspired: Ace, the mysterious cycle-riding figure introduced in Peter David‘s 1985 Peter Parker, the Spectacular Spider-Man Annual #5 — and reappearing again in #6 the following year. I talked to Peter about the character in 1999, and he said the inspiration was part Jackson (his magical music-video elements manifesting as mutant powers here) and part Prince (or at least, “The Kid” character from Purple Rain — I always assumed Ace was more Prince, myself). You can see the times a bit here; music videos were hitting the comics. (We might have normally taken that as a harbinger that the fad aspect of videos was about done, as Dazzler signified for disco…)

There’s a lot more to be said about celebrity comics in general, and this is not any kind of exhaustive list here — nor is it intended to be. Just a look at some various ways real-life folk have made it into comics, prompted by the week’s sad news.

Thanks to the Grand Comics Database for search help!