In one of the earliest releases of such data since Final Orders began being reported in 2003, Diamond Comic Distributors released its Top 300 Comics, Trade Paperbacks, and Market Share data today — releasing the full tables in addition to the usual advance announcement. With the release so early — and my own schedule playing a role — the Comics Chronicles estimates will be along a good deal later, but the charts for October are now online here.

They show something that hasn’t happened in comics in a very long time — by my count, at least 40 years: DC swept the top of the list with the six-best selling comic books of the month, as ordered by retailers. Blackest Night again led the market, its fourth issue taking the top spot.

Marvel has taken the top six slots many times in the decade of the 2000s; in January 2005, it took the top thirteen slots. But DC’s performance immediately stands out. The company has not taken the Top 6 in the entire Diamond Exclusive Era — and going further back shows few recent opportunities for it to have done so. While I have not scoured every month going backwards, the most obvious candidate was April 1993, when the return of Superman began in the line; the top five titles were Adventures of Superman, Action, Superman, another issue of Adventures, and Superman: Man of Steel. But in both the Diamond and Capital lists, Turok: Dinosaur Hunter #1 from Valiant took the sixth spot.

That sends us back to 1968, when DC had seven of the top eight comic books — and as Archie wasn’t out every month, there may have been months when DC had the top six titles on the racks. Certainly, it had the Top 6 in months of 1966, when DC published 11 of the Top 12 comics and, again, the other ranking title, Archie, was only out nine times a year. 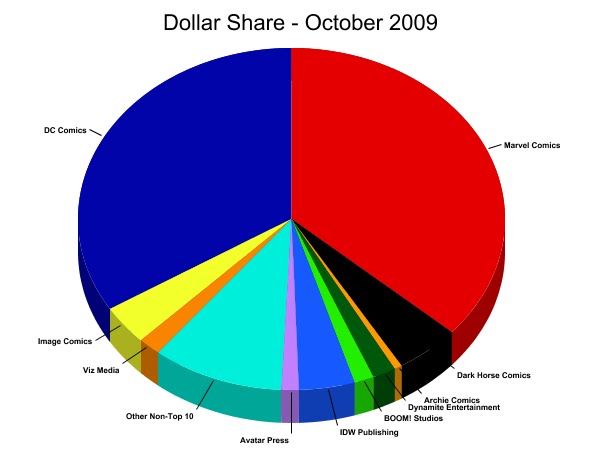 Of course, in that era, we’re not looking at the same statistic; we’re looking at overall sales, including newsstand, as opposed to direct market sales, which is what the Diamond chart represents. In the case of October 2009, it is possible that Marvel’s newsstand and subscription sales on its higher-ranking titles might change the ranking somewhat. But as a direct market phenomenon, this appears to be a first for DC.

Marvel still led in overall unit and dollar market shares, though by a narrower margin than sometimes seen recently; Marvel had 98 comics in the Top 300, to DC’s 96. Only 19 publishers were represented in the Top 300.

He is the author of novels including Star Wars: Kenobi, Star Wars: A New Dawn, Star Trek: Discovery – The Enterprise War, and his upcoming release, Star Trek: Strange New Worlds – The High Country. Read more about them at his fiction site.