On July 29, a Senior U.S. District Judge for the 7th Circuit Court for the Western District of Wisconsin ruled that writer Neil Gaiman had the right to a share of the profits from comics and merchandise related to three characters from Todd McFarlane‘s Spawn franchise. Maggie Thompson reports the ruling here, as part of her exhaustive, in-depth coverage of the case; you can read from the first chapter here. 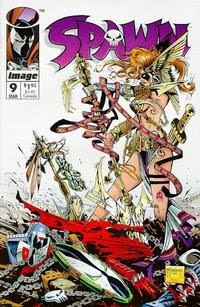 It’s the second case spawned (no pun intended) by a comic book that was actually part of a publicity stunt from the first year of McFarlane’s title. Back in 1992, McFarlane, who had made a splash both writing and drawing the “adjectiveless” Spider-Man series, which launched 20 years ago last month, took on criticisms of his writing style by hiring four big-name writers to produce issues of Spawn, with terms favorable to them; Alan Moore, Gaiman, Dave Sim, and Frank Miller wrote issues #8-11 respectively. Gaiman later sued for, and in 2002, won a share of the rights to the characters of Count Cogliostro, Medieval Spawn, and warrior angel Angela, from Spawn #9. The judgment was upheld on appeal in 2004.

The current suit involved the ownership of characters that had appeared later over the years in McFarlane’s titles, specifically Dark Ages Spawn and warrior angels Tiffany and Domina. During the months of June and July, Gaiman, McFarlane, and Spawn: The Dark Ages writer Brian Holguin appeared before Judge Barbara Crabb to determine whether those later characters were derivative of Gaiman’s work; the judge ruled Thursday that they were.

The ruling, which invokes a previous case involving former Beatle George Harrison and the song “He’s So Fine,” may be the only occasion in which a judge has ever discussed voluptuous warrior angels wearing “ill-fitting armor bras.” The whole court record, taken from the beginning, makes for fascinating reading about comics production behind-the-scenes.

The connection with Spawn #9 also provides a connection to the days of blockbuster sales; several times in the past, including during the current case, I have been contacted for historical background and such sales figures as are in my archives. My records are only partial, but I can share a few things here:

In 1992 and 1993, Capital City Distribution, headquartered in Madison, Wis., the same site as the court case, was the second largest distributor of comics to the comics-shop market. For a publisher like Image, whose newsstand distribution was just beginning, Capital would have provided a larger share than usual of overall sales. Capital’s first-month preorders on Spawn issues then — including, for comparison, the issues before and after the “guest author” issues, are as follows:

Capital’s initial orders of Spawn #1, in 1992, had been 204,760, a figure Gaiman’s issue nearly matched and which all the other titles beat; since Spawn #1, no issue had broken 200,000 at Capital — until Moore’s issue. (Note that since Capital’s reports were preorders, reorders would have made the total figures higher than those recorded here. Spawn #1 is widely believed to have broken the million-copy mark, overall.)

Interestingly, Gaiman’s issue is the lowest-seller of the guest-author series at Capital; Dave Sim’s issue had higher orders in a time in which Sandman was outselling Cerebus seven-to-one. A likely contributor was the fact that Gaiman’s issue shipped in January, typically a very weak month for comics orders relative to other months.

The actual figures would, of course, have been made available to the parties involved in the 2002 court case. But we can see that just within the run of the Spawn title at the time, the issues the guest authors were on did sell better than those before. Sales continued to be well above earlier levels even after the “guest author” program: orders at Capital would remain above where they were before the program for most of the rest of 1993, until issue #17. (Don’t be misled by the drop in rank for #12: that was April 1993, when Superman returned from the dead and Valiant’s Turok launched. Sales in the direct market were never higher before or after that month. )

Sales on many titles were buoyed by the peaking market in this period, but the boost Spawn got starting with #8 was larger than the average increase by far. While the litigants have obviously had their own reasons to look back on this time, from the standpoint of circulation history what we see is a picture of a very successful editorial promotion.