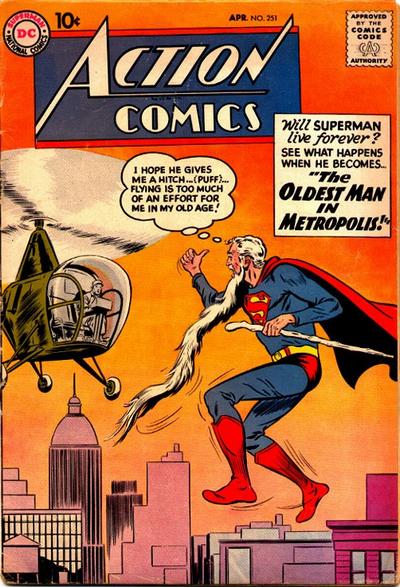 Russ Maheras is one of the premier “comics archaeologists,” having delved into the microfilm files of the Audit Bureau of Circulation to find much of what we know about comics sales from the Golden Age. (Find some of his research here.) On reading my post this morning about February’s comics sales, Russ wrote in with the following:

“After reading your post, I did some quick ballpark math to give myself a better strategic picture of the true health of today’s comic book industry vs. the comic book industry of, say, 1959 — and I found the results very interesting.
“According to your figures, in 1959, comics were selling about 26 million copies per month, or about 312 million copies per year. For the sake of argument, let’s use 10 cents a copy as the mean retail cover price (yes, there were some 15- and 25-centers on the stands back then, but we’re just trying to get a quick-and-dirty snapshot). That comes to a grand total of about $31 million in 1959 annual sales for the industry. Trade sales, film and television income, and other licensing income was negligible for almost all comics companies in 1959, and profits from video games did not exist.
“So that $31 million, plugged into the Department of Labor’s inflation calculator, is equivalent to about $236 million in today’s dollars.
“Last year, according to your figures, total annual sales for comics in the direct market were about $260 million, and for trades about $160 million. That’s $420 million in total retail revenue for the industry — more than what it was in 1959 — plus what comes from the bookstore trade. And we haven’t even begun factoring today’s substantial television, film, and video game revenue which can often blow comic book revenue out of the water.

“Call me overly optimistic, but it sure looks to me like the overall financial health of the industry looks positively exceptional compared to the “good ol’ days” of 1959.”

Russ’s comparisons are thought-provoking. I haven’t had time to dig too deeply into the Bookscan figures for 2010, but from what I saw in Brian Hibbs‘ report, it’s reasonable to expect that perhaps another $200 million is out there beyond the Direct Market, when bookstore sales and newsstand comics are included. So we’re looking at a 2010 figure in the low $600 millions, exclusive of licensing.

Now, the first question out of the gate is whether the 1959 figure is correct. (We’d probably agree that 1959’s sales probably were nowhere near as good as those around 1950, but let’s take what we have to compare.) As I wrote at the time, those figures were based on self-reported monthly circulations from the major publishers to the N.W. Ayer & Sons Directory — an annual publication that for more than a century under various names included information on periodicals for the use of advertisers.

As I wrote then, the 26 million-copy-a-month  figure was a minimum that included everything from Dell, DC (National), Marvel, Charlton, Harvey, ACG, and Archie — left out were Fawcett and some smaller publishers. But even if we cranked that $236 million inflation-adjusted figure up to $300 million, that’s still less than half the 2010 total with trades included — and pretty close to equal to the dollar value of periodicals moved in the direct market and on the newsstand. To restate: dollar sales for comic books in 2010 were similar to the inflation-adjusted dollar sales for comics in 1959 — and that doesn’t count trades!

The problem with this sort of comparison is the caveats; you could fill a truck with them. The obvious one is that we don’t just want dollars, we want eyeballs. The Direct Market ordered between 70 and 80 million comic books in 2010; throw in all the trades and we’re looking at a bit over 100 million items. A bunch less than the 300-400 million in 1959, to be sure — and we can see that when it comes to the very long haul, comics have increased in price faster than inflation, which would expect a 10¢ comic book in 1959 to cost 72¢ today. But even that comparison is misleading, because the two products, while near in shape and size, are different in many respects. That 1959 comic book may well have had 48 pages, making it an even better deal — but on the other hand, the 2010 one is on better paper, with better color and printing. And there are other things built into the 2010 price, not the least of which is better compensation for creators relative to 1959. We’re looking at the overall dollar value of the merchandise here, not profit; there are many more players to pay, now.

The numbers show it, but I think it’s beyond doubt that the modern comic book is simply more valued as a good today than comics were back then. Comic books were, as Paul Levitz has said, considered loss leaders by retailers in the old days; and while today’s fans would regard the comics of that time as actually under-priced (no cover-price increase for inflation for most of the 1960s!), it would have been hard to get buyers to go beyond that going rate — as Dell found when it tried to boost prices and had to retreat. Today, the package is regarded differently enough that when there have been price increases outpacing inflation, some portion of the readership does still follow. It’s the difference between a specialty market and a mass market.

It’s the old dilemma in the field. Broad sections of the legions of customers we had in the 1950s were only casually interested in comics, and abandoned them — but those who remained eventually gave rise to the smaller core of devoted readers willing to pay more for better-creator-compensated, better-printed, better-delivered comics. That devoted base, Russ’s numbers suggest, has made for a more financially successful industry today — but we all still have that nagging feeling that, to make it into the next generation, we need the masses again. It’s not clear that’s even desirable — the comics of the largest boom in recent memory, the early 1990s, are not on balance regarded as fondly as those from some other periods — and when those boom readers left, disaster ensued. But on the other hand, it does strike me that in the 2010s, the market would be much better able to absorb that kind of added interest from outside. There remain a lot of regions that could easily absorb new comics shops — and the barriers to entry for new publishers and retailers are just high enough that both a glut of new shops and of new titles might be avoided, especially with the internet as an alternative distribution system. It would certainly be interesting to find out!