Saturday, May 6 is Free Comic Book Day,
the sixteenth observance of the comics industry’s official holiday; in recent years, many libraries have taken part, as well. I’ll be doing a FCBD event in the Chicago area at noon on Saturday at the Algonquin Area Public Library — and heading over at 3 to do a Star Wars-themed event for the Arlington Heights Memorial Library. I wasn’t able to make any stops last year, so this is a return to tradition…

…and in something else
that’s become a tradition for this site, I’m retelling here the story of how an event
which began with a suggestion by a retailer in the pages of a trade
magazine has  become a major happening in stores around the world, and
the kickoff not just for the summer but most of the comic book year for
many publishers.

There
had been earlier hopes for an equivalent to the milk marketing board in
comics — some kind of advertising council — over the years, including a
publisher-and-distributor attempt in the mid-1990s that met several
times but never generated much of anything before it vanished in the
industry’s collapse that decade. The idea for Free Comic Book Day, by
contrast, came from the retail sector — or, rather, from a retailer: Joe Field, owner of Flying Colors Comics in California. 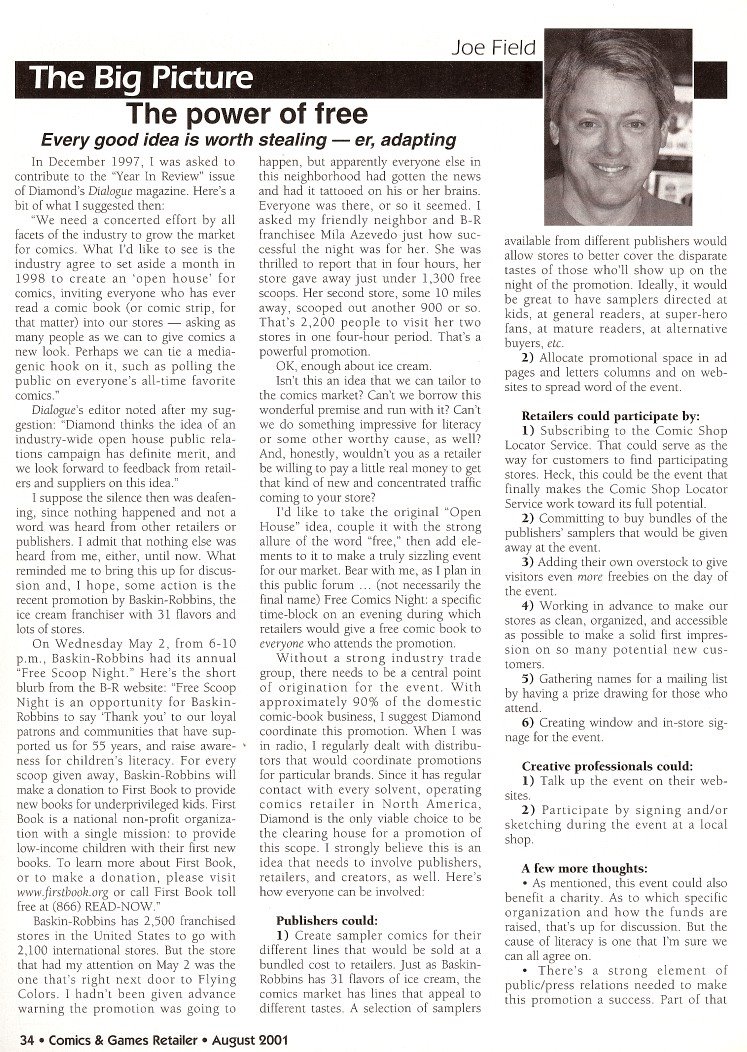 I had signed Joe on in the late 1990s as a monthly columnist for Comics & Games Retailer magazine,
a trade publication that went for free each month to most of the comics
shops in North America. Like the other columnists, Joe’s contributions
ranged from commentary on retail issues to practical advice — and in June 2001,
just as the comics industry was beginning to emerge from the disaster
of the 1990s, Joe advised us he had a special column on the way, along
with something unusual: an instantaneous response from the Powers That
Be being addressed.

In “The Power of Free,” Joe spoke
of how Baskin-Robbins had held its annual Free Scoop Night on May 2,
2001. The event resulted, he wrote, in the ice cream store near his shop
moving 1,300 scoops in four hours, meaning that’s how many patrons came
through the door. Joe wrote that he’d suggested a national comics “open
house” event to Diamond Comic Distributors in 1997; now, he thought, the key element to add would be giveaway comics.

Giveaway comics were a major source of new readers for the comics industry over its history, from the March of Comics issues given away at shoe stores to the Big Boy
comics still distributed in restaurants. I’ve done a lot of research
into those and several other giveaway lines over the years — and it’s
plain that many of the people who learned to read comics (and, odd as it
sounds, the storytelling language of comics is something one does have
to learn to read) learned it from ones they got for free. Most of those
comics went completely away in the 1980s and 1990s. Joe’s suggestion in
the article was that publishers could create sampler comics for their
different lines — “just as Baskin-Robbins has 31 flavors of ice cream…
a selection of samplers available from different publishers would allow
stores to better cover the disparate tastes of those who’ll show up.” 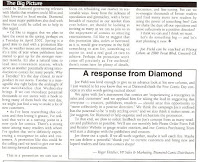 Joe
suggested a variety of steps that could be taken by publishers,
retailers, and creators; I’ve posted the original article pages here,
which I hope he doesn’t mind. Click the pages to see them larger. It
shows that many of those ideas, relating to the production and
distribution of the samplers, were pretty close to what was eventually
adopted. It also shows the sidebar response from Diamond’s Roger Fletcher, embracing the idea and promising to solicit retailer interest in the idea.

And it happened. The first Free Comic Book Day was on May 4 of the following year — right after the release of Spider-Man,
and a year and two days after the Baskin-Robbins event that Joe said
provided the partial inspiration. The magazine followed the progress of
the event, and was happy to be associated — our Maggie Thompson attended
many of the FCBD board meetings as an advisor. But it all came from Joe
— and Diamond and the major publishers’ evident agreement that, as he
had written, 2001 was the beginning of a turnaround for comics, a new
opportunity. “There’s a strong sense among many retailers with whom I’ve
spoken that we’re definitely experiencing a resurgence of sales and
customers,” he wrote. “A promotion like this could be the calling card
we need to give our market strong forward momentum.”

And
it did. A few years later, both the sportscard and gaming hobbies put
together similar events, organizers citing the FCBD experience as a
positive reason to go forward. And FCBD still goes forward. The event has even inspired similar events in other product areas; Record Store Day, launched in 2007, was directly inspired by Free Comic Book Day. There have also been additional themed days launched for comics shops in Halloween ComicFest and Local Comic Shop Day.

Lots of free comics are on offer this year. Participating stores and their events can be found on the official website. If your local comic shop is not listed, give them a call for a complete list of events and signings.

He is the author of novels including Star Wars: Kenobi, Star Wars: A New Dawn, Star Trek: Discovery – The Enterprise War, and his upcoming release, Star Trek: Strange New Worlds – The High Country. Read more about them at his fiction site.