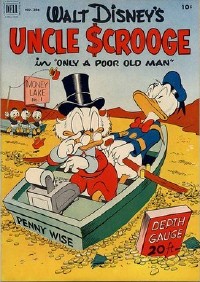 I’ve been adding quite a lot of Statement of Ownership data to the Comichron database for an update coming soon; the list of titles I have information for in 1960 has more than doubled in length since my initial post here. It’s all coming soon, but for an early taste, I’ve added a full Title Spotlight page for the #1 title of 1960 — Uncle Scrooge, created by Carl Barks for Disney. I have full data for all but a couple of years — see it here.

Uncle Scrooge was an original creation for comics, first appearing in a Donald Duck story before getting three issues of Dell‘s Four Color Comics. Those three issues were the start of a series that continued from Dell into the 1960s, before changing to Western Publishing’s Gold Key and, later, Whitman labels.

The series was quarterly as it entered the 1960s, and its sales of just over a million copies per issue was indeed enough for the top spot; only Walt Disney’s Comics & Stories also topped 1 million, also in 1960. 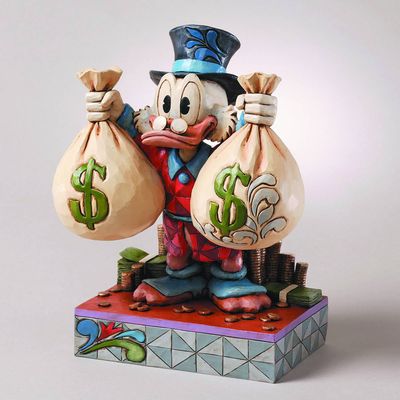 Not counting Mad, no other American comic book would sell more than a million copies until Star Wars #1, in 1977 — and no comics title has ever had more copies reported sold in its annual Statement of Ownership. Marvel’s adjectiveless X-Men series topped out just under 1 million when its first average was figured, though X-Men #1 from 1991 remains the best-selling American comic book of all time.

We see Uncle Scrooge data up until 1972, when Gold Key gave up on second-class subscriptions — but the figures would return to the title in the 1980s when Gladstone revived it. Disney took over for a while, and then Gladstone took it back — and subscriptions and statements continued. I don’t believe there were statements in the Gemstone or Boom issues of the 2000s; if anyone knows otherwise, please let me know. Likewise, I have not ruled out the existence of forms for 1990 and 1992, which would have appeared in issues early in those years; these were during publisher transitions so it is possible they may not exist. But if anyone has them, drop me a line at my contact address on the left of this page.

It’s meaningful, I think, that the best-seller of the 1960s should come from Barks, whose work was originally uncredited and who was known originally to fans as “the Good Duck Artist.” Fandom in the 1960s was bringing attention to a lot of people who had previously been unheralded, and Barks is a great example. He changed comics — and now comics were changing.

Update: I was asked over on Facebook (where you can follow Comichron) why the title suffered such a steep decline in 1963, falling more than half a million copies from 1961, the last year we had figures for. (In the transition to Gold Key, the publisher decided to only print subscription sales for its line in 1962 — an error fixed in 1963.) There are a few possibilities for the drop that come to mind.

With its own distribution network, Dell’s reach was vast. The title’s sales were almost certainly more than a million in 1958 and 1959. Dell was not audited by ABC so it’s not easy to know, but my sense is it was less impacted by the Code than the publishers of other titles. By 1963, though, it wasn’t Dell any more, but Gold Key — and if that involved a shift to the regular Independent Distributor networks, that could account for a major difference there. Uncle Scrooge had also gone from four times a year to six, which could have had an impact on print runs and orders — and just before that, I really think Dell’s mistiming of the market by going to 15¢ was ultimately ruinous when the rest of the market went to 12¢. There may be other reasons, but it’s worth noting that Gold Key saw these drops pretty much across the board, so I don’t think it’s necessarily endemic to Scrooge.